Pilots At Increased Risk Of Melanoma

As a kid I always looked forward to that quick peek into the cockpit you got when boarding an airplane. Sometimes the pilot would give me a quick wink while mumbling important pilot stuff into his headgear. 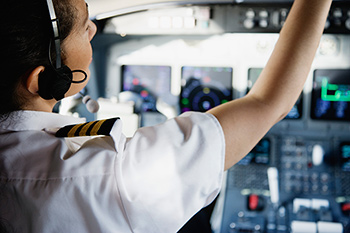 What a magical place that seemed. But while the pilots may enjoy the best view, it turns out that being in the front cabin is not the best seat in the house. There has been growing evidence that commercial pilots and cabin crews experience an increased incidence of melanoma, the deadliest skin cancer. The windshields at the front of the plain have been found to be poor blockers of ultraviolet-A radiation, which is a major cause of melanoma and sun damage.

In the past, fears surrounding cosmic radiation at high altitudes worried passengers and crews alike. These concerns turned out to be unfounded eventually. But no one ever worried about the ultraviolet radiation enough to measure it. Dermatologists noticed that pilots had a curiously high risk for developing melanoma. But it was not uncommon to also see this lethal skin cancer in flight attendants, as well. It was hypothesized that flight crews simply had more opportunity to layover in sunny destinations than the average person did. No one really had an answer. After the terrorist attacks of Sept. 11, 2001, we locked the pilots in the cabin and locked everyone else out. This changed the radiation exposure pattern among the crew.

Last April, researchers in Las Vegas and San Jose performed a simple experiment. They measured the strength of the ultraviolet-A rays in the cockpits of several aircraft while at ground level and then incrementally up to 30,000 feet. Both the traditional glass windows and the polycarbonate plastic windows effectively blocked the ultraviolet-B rays, but offered little protection to the melanoma-inducing ultraviolet-A radiation.

An hour flight at 30,000 feet equaled about 20 minutes of ultraviolet-A rays from a commercial tanning bed. The levels are likely worse if flying over clouds or snow, which will reflect much more radiation back into the cockpit. Now federal regulations imprison pilots in the cockpit for the flight’s duration. Imagine the ultraviolet radiation bath they suffer on just a coast-to-coast flight; not to mention the San Francisco to Australia run over the giant mirror called the Pacific Ocean. I find it amazing that pilots are not some of the most tanned people on Earth with exposures like that.

Obviously, the more immediate danger of crashing probably weighs more on a pilot’s mind than the amount of ultraviolet radiation flowing through the windshield. One would think that simply installing transparent ultraviolet filters to the cabin windows would address any concerns and mitigate against any loss of life and future worker compensation claims. Somewhere in the bowels of the FAA, there likely exists a several-thousand-page tome on regulations for aircraft window glass composition. Hopefully, it can be amended without a battle royal between government regulators and the airline union. Sunscreen is an easy partial solution in the short term. But with ultraviolet levels this high, pilots need more protection.

Military pilots are at an increased risk as they fly longer duration missions and have few of the regulatory rules curtailing their hours. They also fly much higher than commercial craft. Although retired from service, the American SR-71 Blackbird could reportedly reach almost 90,000 feet — almost three times as high as what these researchers measured.

Pilots are not the only profession at an increased risk of skin cancer. Truck drivers, road construction crews, roofers and ski instructors are just a few of the examples of workers who need to pay additional attention to their sun exposure. Employers are being increasingly expected to provide sun screen in many public sector jobs.

Occupational-related skin cancers have a rich and storied history. Percivall Pott is credited with recognizing the first cases of workers getting skin cancers from their jobs. As an English surgeon in the late 1700s, he described a type of skin cancer arising on the scrotums of chimney sweeps. Since many of the sweeps had been employed since early childhood shimmying down chimneys, it was not unusual for Potts to see men in the early 20s with scrotal cancer. The carcinogenic coal soot accumulated in undergarments that were rarely washed and perpetually sweat soaked. A chimney sweep’s pants were literally a witch’s cauldron of poor hygiene and toxic chemicals. Pott’s observations led to the Chimney Sweepers Act of 1788 being passed in Parliament, which limited these dangerous jobs to boys at least 8 years old and ensured they had time to attend church on Sunday.

Other common occupational skin cancers were seen in doctors and dentists from repeated X-ray exposure before radiation safety was understood. Underground miners and smelters run the risk of arsenic-induced skin cancers and are monitored accordingly by OSHA guidelines. And if you know any sheep dippers, be sure to advise them they are at risk of skin cancer, as well. And although it is not purely skin cancer related, the case of the so-called Radium Girls, who painted watch faces with radioactive paint, is a stunningly fascinating topic for further reading.

So whether you are a pilot, a chimney sweep, or just driving up and down I-5, keep in mind the giant ball of radiation shining down on you. Enjoy your summer in the North State while at work and play but remember to be kind to your skin.

If you’re interested in getting checked out for signs of melanoma, contact Vita Dermatology & Laser Institute to make an appointment to see one of our medical providers.