Don’t you just love pharmaceutical commercials these days? A soothing voiceover tells us that the drug “may cause dizziness, dry mouth, seizures, sudden death,” while smiling actors run hand-in-hand on the beach, play catch with grandchildren, or share a romantic dinner,” and then “erections lasting over four hours, blindness, flatulence with discharge,” all without a care in the world. 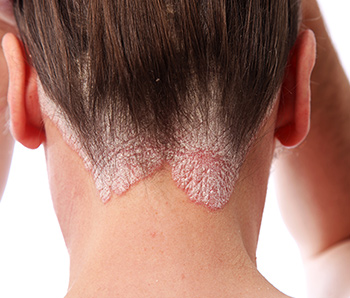 The image on the screen is carefully crafted to temper the message that these medications are powerful and, although generally safe, can have side effects.

The past several decades have seen the introduction of the so-called biological medications to treat previously challenging diseases. Many of the commercials on television are for biological medications we employ to treat psoriasis. And treat it they do. In fact, there never has been a better time in history to have psoriasis thanks to the advent of these wonders. Dermatologists have literally been able to give people their lives back by using biologics. They are simply now the gold standard for anybody wanting to tame the heartbreak and shame of walking through life with itchy, red, scaly skin that flakes and bleeds.

But these medications are not for everyone. Luckily, many older treatments are available and effective. And the list of natural treatments for psoriasis has been steadily growing, as well. Often we will use a combination of herbal and prescription medications to achieve the best results. The following natural psoriasis remedies are taken directly from the National Psoriasis Foundation’s website. (Disclaimer: Talk to your doctor before embarking upon any self-directed attempt at balancing your herbs and medications.)

A common shrub used in landscaping, studies show that a topical cream containing 10 percent mahonia was superior to placebo in relieving the itch and redness of mild psoriasis.

Topically, it can help with redness and scaling. No benefit has been shown from taking it in tablet form.

Helps with itching, especially on the scalp. Commonly diluted with water in a 1:1 ratio, and used daily or as often as needed.

An extract from a red hot chili pepper, capsaicin helps the itching of psoriasis by acting as a counter-irritant to the nerves in the skin. It can be like hitting your thumb with a hammer to forget about your back pain. Applied to the skin in tiny doses, it can be well tolerated and quite effective for relieving itch. Look for it among the arthritis creams as the FDA does not allow it to be marketed for itch relief. Capsaicin is also found in diabetic foot neuropathy creams and the poison oak remedy dubbed Sasquatch itch cream. Capsaicin is widely available at most pharmacies and herbal shops, so there is no need to start rubbing powdered chili pepper on your psoriasis.

If you use these salts, or Epsom salts, in your bath water, be sure to moisturize afterward. A 15 minute soak can remove scales and calm itching. Try adding the oats.

What is this oil not used for these days? As a shampoo, it may relieve your scalp psoriasis, but studies are lacking. Contact allergies to tea tree oil are on the rise however, so discontinue if your itching and redness worsen.

Recently, the dermatological literature has included a few promising studies on turmeric and its active ingredient curcumin. This common cooking spice measurably alters the skin’s immune system in a favorable manner for psoriasis. The FDA considers up to 3.0 grams of turmeric daily to be safe. The Psoriasis Foundation recommends you consult with a naturopathic practitioner if you feel you require larger doses.

Other natural treatments generally favored by dermatologists that were not listed on the website include vitamin D, phototherapy, topical zinc, salicylic acid, and coal tar creams and shampoos. This being northern California, I have a few patients medicating with various topical cannabis formulations, but I have not objectively appreciated any improvement with their psoriasis. If cannabis worked, imagine the commercials: “…May cause excessive Doritos consumption, bloodshot eyes, and the overwhelming desire to listen to reggae music.”

If you’re interested in getting help for your psoriasis, contact Vita Dermatology & Laser Institute to make an appointment to see one of our medical providers.